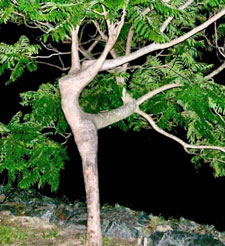 I finally “enlightened up” under the “bodytree” on a full moon night in Osho Teerth Park.

I spent the entire night in a full lotus position, meditating on all the women I loved this lifetime… one after another, my “gopis” appeared naked in my third eye… I thanked each one and as I namasted each and every one of them, they each individually disappeared in the very same moment… when the sun arose, I was sitting alone, but not lonely for the first time in my adult life.

This meditation came about after I thought I had finally met the woman of my dreams at a Plaza Dance Party.

Our eyes met, we danced the night away… we ended up at her riverside flat.

I had that soul mate feeling in my heart… could this finally be the one… she said she felt the same way… as we looked into each other’s eyes, we felt our two hearts beating as one. This is it.

After a long night of making love, I noticed a photo of another man on her night stand by the bed. I began to worry.

“Is this your husband?" I nervously asked.

“No, silly," she replied, snuggling up to me.

“Your boyfriend, then?" I continued.

"Is it your dad or your brother?" I inquired, hoping to be reassured.

"That's me before the surgery."

P.S. This is AMAZING! Until now I never fully understood how to tell the difference between male and female birds. I always thought it had to be determined surgically... until now.

Below are two birds. Study them closely... See if you can spot which of the two is the female. It can be done. Even by one with limited bird watching skills.